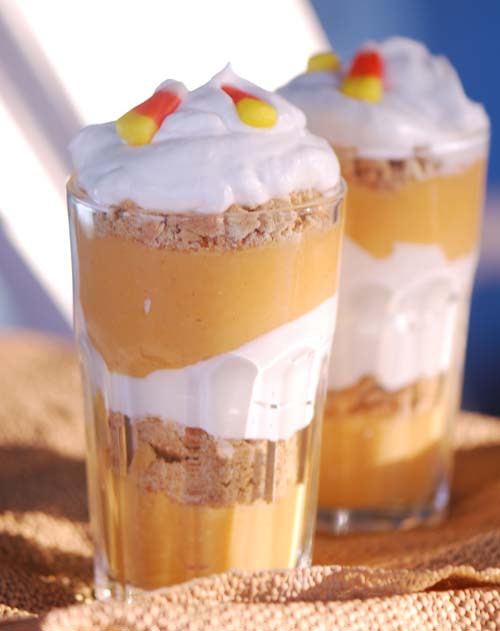 I bought 12 cans of pumpkin puree back in October and now I'm down to 4 cans. I have been trying different pumpkin recipes like mad lately. The latest pumpkin recipe I've tried are these pumpkin parfaits, topped with some candy corn. Aren't they cute?  If you can't find pumpkin pie pudding don't worry. All you need is some instant vanilla pudding, a can of pumpkin puree, and some pumpkin pie spice if you desire for extra flavoring. It takes a little bit more effort to make it but oh well!

Sometimes, when using canned pumpkin I've been very lazy... if there's any left over I'll forget that it was in the can. Two days later I'll see the can of pumpkin puree on my kitchen counter. 🙁 Is it even still good if it has been sitting out for that long? I would like to know that, but today I was really good and put some in a container and back in the fridge. Maybe I'll make some pumpkin oatmeal for breakfast one morning. For dinner tonight, we had Hamburger Helper. 😉

1. In a medium bowl, combine Jell-O Pumpkin Spice Pudding Mix with 1 cup of cold milk and whisk for 2 minutes; fold in 1 cup of whipped topping until no white streaks remain.
2. Evenly spoon or pipe half of the pudding mixture into 4 small glasses; add 1 tablespoon of graham cracker crumbs directly onto the pudding layer.
3. Evenly spoon or pipe half of the remaining whipped topping directly onto the graham cracker layer; repeat layers with remaining ingredients.
4. Garnish with candy corns, shaved chocolate, or graham cracker crumbs. Refrigerate until ready to serve.
5. Note: If you choose not to use frozen whipped topping, simply sub in whipped cream.

More recipes you may enjoy