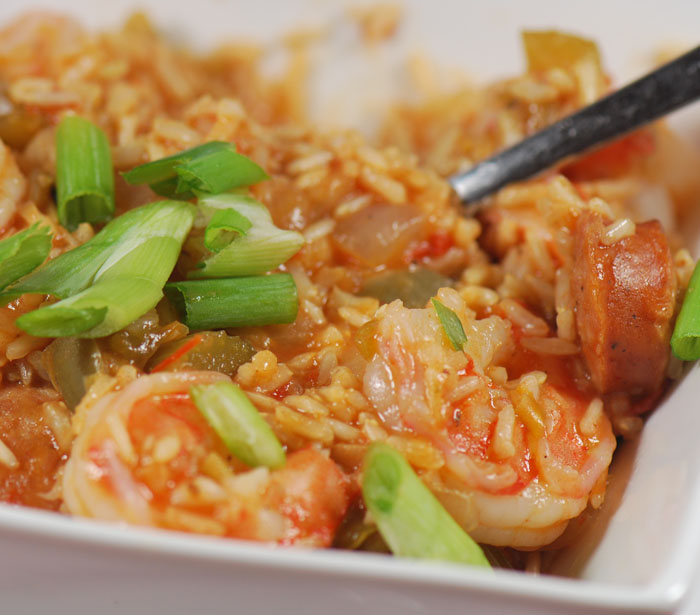 This is my first time ever trying Jambalaya and my first time trying andouille sausage. It is amazing what you can find in the grocery store if you just ask someone. I had gone on Friday to get the ingredients for this and didn’t find any andouille sausage at all. Instead I had found kielbasa. I don’t know why I didn’t ask someone when I had gone on Friday, but there happened to be somebody there unpacking sausage in the meat department. I asked him where I could find andouille sausage and he handed a package to me. I was so happy, cause I had finally found it and had seen Bobby Flay with some other guy on Grill It this last week ,make a shrimp and andouille sausage dish on the grill that looked fabulous. Might just have to try both recipes now.

This recipe took longer than it did to make. I had set the timer for 15 minutes to wait for the rice to finish cooking and all the liquid to absorb. The rice water hadn’t absorbed yet and I was a little ticked because now, I had to wait another 15 minutes for another cup of rice to finish cooking. There was so much liquid in that pot I thought I was going to have to drain some out. Once I added more rice to it, and had waited a little longer for it to get done cooking the bottom of my dutch oven turned black. Uh oh. Now what I have is a huge pot of Jambalaya (leftovers for the week) and a pot that I have to soak for awhile. The rice still didn’t get done enough, but over all I did like this recipe. The sausage was nice and spicy and the shrimp went well with it. Who doesn’t like shrimp? I don’t really know of anybody that does. 🙂