This recipe for grilled steak tacos actually came from a multiple number of recipes. I was browsing  the June recipes from Cooking Light and saw Flank Steak Tacos. Then, I saw chipotle-rubbed flank steak. I ended up using the spice rub from the chipotle-rubbed flank steak recipe, which was just 2 spices: ground chipotle and paprika. I also came across a recipe for a Tomato, Avocado, and Corn salad and I thought that would be great on some tacos. Sure enough it was! The only thing I thought this taco could have used was some creamy chipotle sauce, but it was still good. More dressing from the salad could have been good also.

Do you watch the Next Food Network Star at all? I've watched every season since that Amy won, but she ended up not wanting a show anymore. I was bummed, because I really like her. The new season started last night and there was more drama on that show than normal. I thought that lady who wants the show Stilettos in the Kitchen was a real bitch and I would never watch her show just because of her attitude problem. I also see they have another Asian cook on that show this season and her name is Orchid. I really liked her and would like to see an Asian cooking show on the Food Network. I would also like to see more healthy cooking shows too. 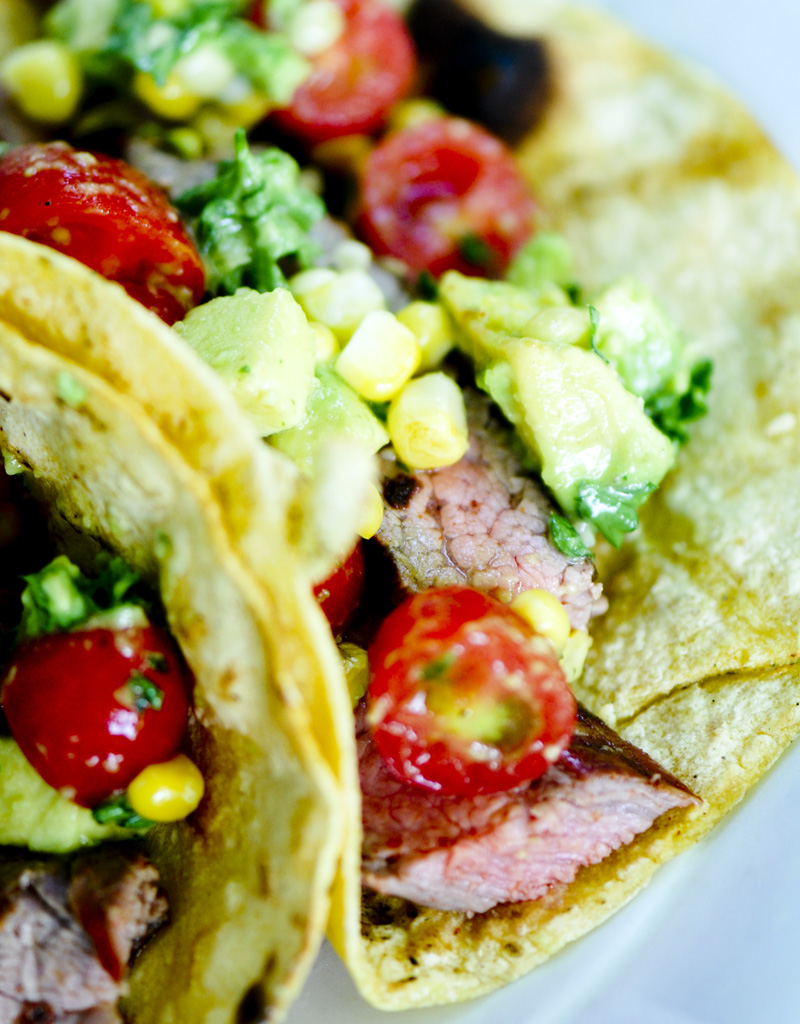 Combine first 3 ingredients for the steak. Sprinkle steak with chipotle mixture. Place on a grill; cook 5 minutes on each side. (We only did 3 minutes per side
since it was a thin steak) Let stand 5 minutes. Cut thinly across grain.

Slice the tomatoes in half. Remove husks from corn and grill over medium heat for 10 minutes. You can grill the corn during the same time the steak is cooking. The corn should have some brown spots and be tender and not mushy. Cut the corn off the cob then scrape the cob with the back of your knife to get the juices. Set aside and let cool. Dice the avocado and chop the cilantro.

Add all the dressing ingredients in a small bowl and whisk to combine. Set aside.

Combine the sliced tomatoes, avocado, cilantro and grilled corn and honey lime dressing and mix gently so everything is evenly coated. Be careful not to mash the avocados. Let the salad sit for 10-15 minutes to let flavors mingle. Enjoy.

I am not affiliated with WW formerly known as Weight Watchers in any way. I am just a member who likes to create WW recipes and share them with everyone. Freestyle is the name of the current program of WW and smart points are calculated for the recipes. Some blogs list them as freestyle smart points and some list them as smart points. There is no difference between the 2.