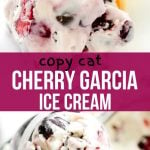 Cherry Garcia ice cream has chunks of chocolate and cherries in there, and oh man it is my favorite ice cream to eat on a hot Summer day. It really hits the spot!

This ice cream you don't need an ice cream maker to make it. The whipped cream gets beat until stiff peaks form, and you can even do that with your hands. If not just use some electric beaters or a stand mixer! I've never tried whisking my own whipping cream, but I've seen the chefs on tv shows like Chopped do that. Then you fold in all the ingredients. I seem to have an ingredient problem whenever I make ice cream. Either I don't put in enough add-ins or I'll put in too much!

Since it's Cherries for Charity week, I picked up  a 3 pound bag of cherries for a $1.99 a pound. The grocery store donates .25  of every pound of cherries sold to a local charity here in town. That is the best deal ever for cherries. Lately, they've been 3.99 a pound. Trust me, I'll be back for about 2 or 3 more bags of cherries by the end of the week. I'll be looking for more cherry recipes to make too.

What Ingredients do I need?

In this section, you can find substitutes or suggestions for certain ingredients. I also will try and list out what the ingredients' purpose is for.

Cherries  - make sure they are pitted, if frozen let them defrost

You can print off the full recipe below.

Here are some tools that will help will help you with the recipes. All links will open in Amazon. Yes I do get a small earning if purchase from the link

Other Recipes To Try

25 Recipes for the Slow Cooker

If you’ve tried this Cherry Garcia Ice Cream or any other recipe on the site, let me know in the comment section how it turned out. Snap a picture and upload it to Pinterest.